June 2014―In the proverbial shadow of the Georgia Dome and in spite of the fact that there were few literal shadows, Atlanta Presbyterian Fellowship’s Vacation Bible School attracted a total of eighteen students from the Bluff and surrounding neighbourhoods.  The theme was “The Ten Commandments” and it was a joy to watch the children, ranging in age from about 5 years to 14 years old, enjoying the lessons, the skits, crafts and games, and learning about God’s Law. 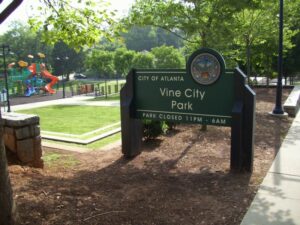 The event was held in a very pretty park in the Vine City area of Atlanta which, although still in a low-income neighbourhood, is not as derelict, and does not have the crime rate of the Bluff even though it is only a few blocks from it.  It ran from 10 to 12 on Friday and Saturday mornings, the 13th and 14th of June. 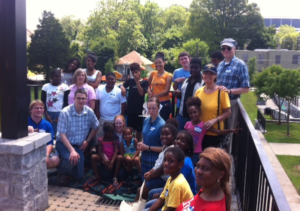 The event did highlight one of our prayer requests, namely that of the need for a people-mover because even with three people and their cars ferrying children back and forth to the Vine City Park, some participants were having to arrive well in advance of the activities. However, amazingly, we were able to start on time both mornings.

There was no need to reserve any part of the park but we hadn’t checked on “park maintenance day”. So on Friday morning we arrived to find that city workers had just started mowing the long, wet grass in the area in which we had intended to set up the activities. They were apologetic and directed us to an attractive patio which overlooks the park and was a perfect place to set up our tables and prepare for the children to arrive. The noise of the mower, blower and trimmer did not completely cease until we were about half an hour into the activities, but it did not prove to be a particular obstacle.

Pastor Frank opened the session with prayer and then led the children in some songs to help break the ice. 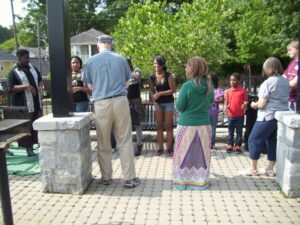 This was followed by a skit which, on the first day, illustrated the events leading up to the giving of the Commandments. It had our two Short-Term Missions Team members (Josh Giesler and Calvin Biedeman) dressed up as Moses and an Israelite, with Pastor Frank as Mount Sinai. 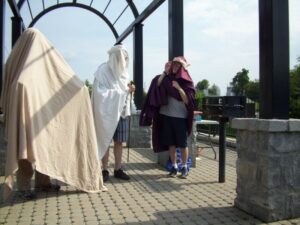 Amy then kept the younger children on the patio with her to do the lesson on the first table of the law, and Josh and Calvin took the older ones to a grassy area under some trees. 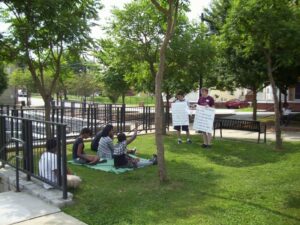 The boys led the games for both age groups out in the freshly-mown grass and Amy led the crafts, making Ten Commandments magnets and Mt. Sinai models complete with cloud. Everyone regrouped for snacks but, having been invited to lunch by a group of folk from a nearby church, we headed there for cheese sandwiches and fruit cups. We had a total of twelve children and eight adults in attendance. 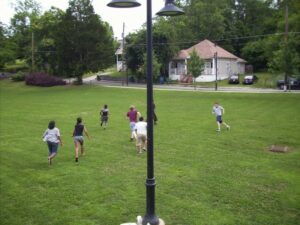 The second day opened in the same way and the skit this time had Amy’s character expressing to Calvin’s character her serious misunderstandings of the purpose and relevance of the Ten Commandments and their applications in real life, even arguing some points that Calvin was making. Eventually, however, her character comes to understand the biblical principles and how to put into them into practice. 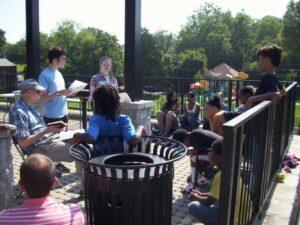 The lessons covered the second table of the law; games were played and crafts fashioned including file folders shaped like the tablets of stone which opened to show each of the commandments. 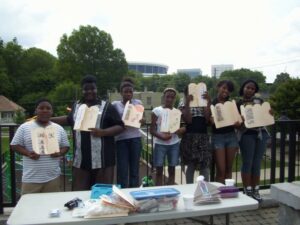 This time we provided double cheeseburgers and cold sodas for lunch at the end and received pledges from many of the children that they would come to church the following afternoon and give presentations of their crafts and what they had learned. On the Saturday we had fourteen children in attendance and eleven adults. Four children from Friday did not return (three of them because they went home, which is out of the area, and one because of a sore throat). But six additional children came giving us seven each in the older and younger groups. 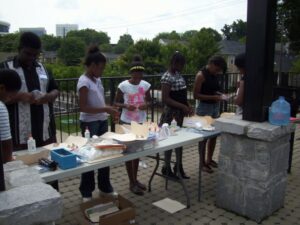 Eleven of the children did come on the Lord’s Day including three, along with their mother, who had not attended a service with us before. The same skits were performed with Pastor H. P. McCracken from the Southern Church Extension Committee playing Mt. Sinai. Pastor Frank provided the sound effects of thunder, lightning and trumpets much to the amusement of all. 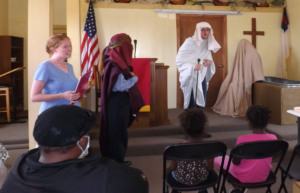 With only two weeks to put it all together, Miss Amy did an outstanding job leading the planning for the VBS, including the overall production, both skits, the lessons for the younger children, and all the crafts. Josh and Calvin planned the lessons for the older children and the games. Advertising was done door-to-door and one-on-one in the streets, with Pastor Frank and the Missions Team using a downtown apartment (bereft of stove and shower), as their headquarters.

We are so grateful to the Lord for bringing so many children to our mini Vacation Bible School and for bringing them back for worship the following day. We hope and pray that these young people will not soon forget the lessons they learned. The concept of following a moral law and understanding that these laws are still relevant today appears to be practically unknown in areas of crime and violence such as the Bluff. In fact, it was on Thursday morning, the day before VBS started, that we heard of the stabbing death of a man to whom we had ministered many times while still located on the steps of the abandoned church building in the heart of the Bluff. We had entertained him at our house overnight a couple of times so that he could attend Northminster with us on the Lord’s Day. He had come to visit us in our current church building one time, in February, and we had hoped he would return. This man was the second person to whom we had ministered who had been murdered, the other, less than a year ago being a woman who desired to leave her life of drugs when her life was taken by someone who raped and strangled her.

Life in the Bluff is brutal. Children suffer. As I have mentioned before, the Lord has led us to minister to many children in the area. Please join us in praying that the lessons they learned on Friday and Saturday, and the sermon on Sunday, will help to inspire them to love the Lord their God with all their hearts, minds and strength and their neighbours as themselves. 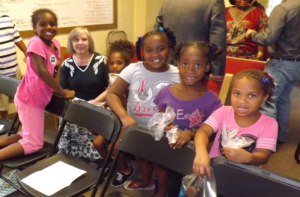