April 2015―As we have reported in the past, our numbers have been growing and on one occasion, in late March, we had 62 people in attendance which resulted in having to put folding chairs up on the platform alongside the pulpit, and even then there was a small number that sat on the floor. 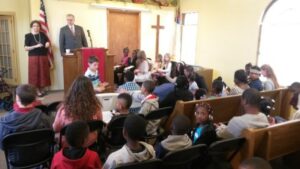 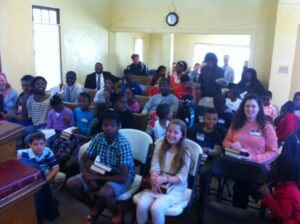 With the number of children attending now it is not surprising that every so often we will have young people who are disruptive, disobedient and disrespectful so we have begun a big push to get more parents to come with their children.  With an uneven ratio of children to adults it is also important to try to get more adults to come and sit under the preaching of the gospel.  Having the 12-seater van has been an enormous help to Pastor Frank who has to make several trips to pick up all the children and then more trips to pick up adults.  Amy, with her car, and a couple of our helpers, with their minivans, also help when and where they can, but another helper with another 12-seater van would be of great benefit. 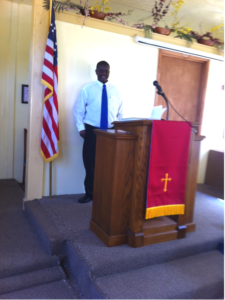 We have been particularly excited that a 15 year old young man, Deon, has been showing a serious desire to grow in knowledge of the doctrines of the church. Every week Pastor Frank leads recitation of the first fourteen WCF Shorter Catechism questions by having one of the children pass out craft sticks with the numbers 1-14 on them.  Then whoever has the stick with number one on it will call out question #1 and everyone will recite the answer and so on.  Deon has memorized all fourteen answers perfectly and, because he is doing so well, we have continued him on, individually, with questions fifteen and sixteen.  Deon loves to stand at the edge of the platform as Pastor Frank is leading the singing, and on one occasion when I took a photo of him he specifically moved from where he was to stand behind the pulpit.  His current thinking with regards to a career is to be a police officer.  It had originally been to be an attorney until, as he told us, he discovered that attorneys are liars, so he doesn’t want to be one any more. We have tried to convince him that the world needs more Christian attorneys but he still doesn’t want to be associated with that profession.

We were particularly disappointed, however, with a comment made by one young lady in the young Sunday School class. On a day when Warren Jackson was teaching the young ones he read the story of the nativity and then asked the kids, who happened to be all girls (seven of them) that evening to tell him where Jesus was born and none of them could answer, so he told them.  Surprised that no-one could answer that he asked them the name of Jesus’ mother and, again, no-one could answer so he told them.  He then went out on a limb and asked them if anyone knew the name of Jesus’ earthly father and, of course, no-one did.  So for most of the rest of the lesson time he kept going over the story and asking them those three questions so that they would end up knowing at least that much.  Towards the end only one girl could remember Bethlehem.  A few remembered Mary and I don’t think that anyone remembered Joseph.   As we were taking one of those young ladies home in the car later she couldn’t remember any of the answers.  But, as striking as that was, Warren and I were floored at the answer one girl gave when Warren asked why Jesus had to come. Her answer was, “because if he hadn’t, white people would be shooting us right now”. That is a sad commentary on the mentality of many residents in the neighbourhood and one reason why we need to bring them to a fuller understanding of the Gospel. 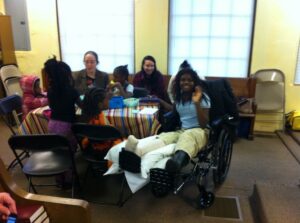 We have had a number of health issues in the congregation over the last couple of months, not least the time that Miyani was hit by a car while playing near the apartment in which she lives.  Her leg was badly broken near the ankle and she required surgery to insert two rods into her leg.  More recently, in fact during Spring Break, she had her tonsils and adenoids removed while her brother, Jenario, had his wisdom teeth extracted and their mother, Miyoshi, was hospitalized for almost two weeks with an infection in a toe which became gangrenous and had to be amputated.  Sadly there appears to be no improvement in her eyesight following the surgery she had several months ago.

Pastor Frank has begun mid-week prayer meeting and Bible Study on Wednesday evenings in people’s homes.  Every other week he meets with adults and on alternating weeks he conducts a communicants class with the young people.  On one occasion, when he was unable to lead the adult study because of sickness, members of the group said they’d just carry on without him and they’d write down anything they didn’t understand to ask him next time.  He was very proud of them for taking this initiative. 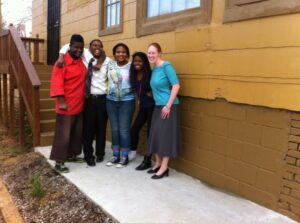