August 2015―Over the weekend of August 8th and 9th Atlanta Presbyterian Fellowship held a Back to School Family Fling, similar to a Vacation Bible School except that it also included adult participants. Designed by Miss Amy Work, the theme was, “God’s Word is Precious”, based on Psalm 19:7-11 and Psalm 119:72.   The event included singing, classes for adults, older children and younger children, crafts and games.  In the picture below we are learning the “The Law of the Lord is perfect, etc.,” chorus: 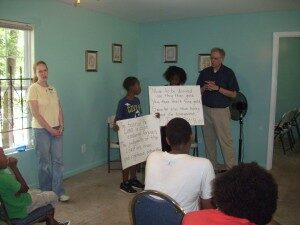 Following the opening exercises the children participated in a treasure hunt, solving the clues hidden around the inside of the building which eventually led them to a beautiful wooden jewelry box in the form of a treasure chest hidden in the stove containing ?????? and a Bible.  Then, during crafts time, the children made their own treasure chests from pre-cut cardboard and decorated them using a variety of “gemstones”, strings of pearls, glitter, etc. that Miss Amy had brought.  The treasures the children put in the chests included a gem-adorned note card with Psalm 19:9-10 on it, plastic gold coins and a miniature Bible on a key chain.

Below are pictures of the younger and older classes and one of the cardboard treasure chests: 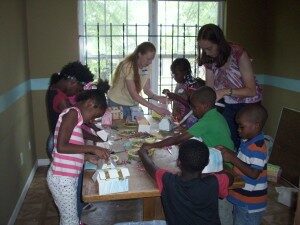 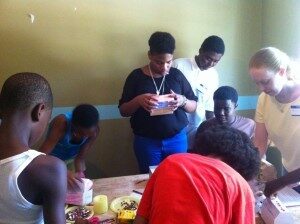 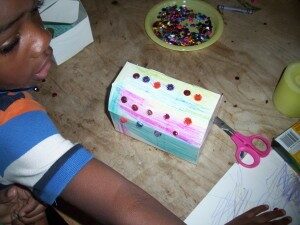 Meanwhile the adult class, led by Tim Bloedow and Pastor Smith, taught adult applications of the preciousness of the Word of God specifically with regard to finances.

Miss Amy had written a skit in which teenage heartthrob, Justin Bieber, (played by Jerusha wearing a Justin Bieber mask) was being witnessed to by a girl on a park bench, played by Miss Amy. 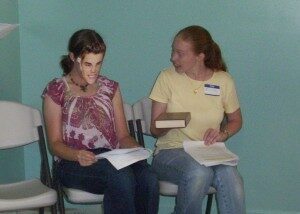 Mr. Bieber rejected what he was hearing, claiming that he has tons of money, so much that he can swim in it.  He said he wanted more stuff, more cars, more fame, more girlfriends, gadgets, etc. He told her, “I’m the god of my world!  Everybody serves me!  The Bible more precious than gold?  That’s crazy, man.”  With that he left to go and get a tattoo.  His bodyguard, however, played by Pastor Smith, stayed, allowing the girl to witness to him.

We had 40 participants including 22 local children, 2 suburban children, 7 local adults and 9 suburban adults including helpers.  Lunch was included and, having learned that the Law of the Lord is sweeter than honey and more precious than silver or gold, the take-home snack comprised honeycomb cereal and chocolate coins wrapped in gold foil.

The closing exercises on the following day began with singing led by Lynette Bloedow including the chorus, “The Law of the Lord is perfect. . . . .” that the children had learned the day before. 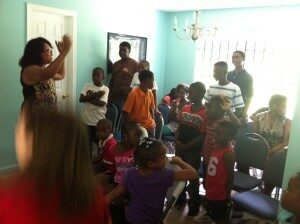 This was followed by a hilarious skit in which Miss Amy’s two puppets, Fiona and Gronk, competed in a cooking contest, the host being played by Jerusha, and the two judges being played by Michele Haag and Pastor Smith.  The winning food was the Bible, i.e., spiritual food, beating out both chocolate and honey.

Following a shortened Sunday School the worship service began with fifty-four people in attendance.  That was the largest number since we had moved in.  We had fifty seats available so the stairs came in handy!  The following is an excerpt from a Facebook page posted by Tim Bloedow, visiting from Canada with his wife, Lynette:

Wow! 30 wild inner city children of all ages making over half the congregation at today’s Atlanta RP Fellowship service. Only 10 adult supervisors/overseers. They need more than that. Big job here. The teachers and other support helpers and Pastor Frank Smith did amazing work. There were also about eight other adults, some from the local community and some other visitors who attend Free Church of Scotland and other congregations.

So much of what’s required in such situations is crowd control and people management so it can become very exhausting for some people. About 3 children needed special one-on-one attention today. I was able to work with two and Chris Myers with the other boy. It’s great to see boys who are starved for good attention change before you when you know how to give them some loving attention without being provocatively confrontational despite their behaviour. In a context like this, you can’t fight every discipline battle. Making progress on 2% of them might be a more realistic expectation. It’s remarkable that Frank can keep his presence of mind to preach his sermons in this context. 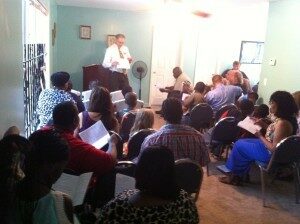 One of the boys I had to deal with was a walk-in off the street with 2 others. 7 years old. A female leader had to take him to the back of the sanctuary part way through the service. He continued to be disruptive so I took over and he kept whining that he wanted to go home. He was getting louder so I picked him up and took him outside. He continued getting louder as I told him to stop acting like a 2 year old and that he will go home but not now, etc., etc. During this time, I manhandled him a bit by pulling him to me and picking him up a couple of times.

He wouldn’t stop whining and crying then I changed approach and asked him what his name was. But he wouldn’t tell me so I started guessing. Almost immediately he stopped his fussing and said no every time I guessed. Then he eventually gave me the first letter. Then a few guesses later, I asked for the 2nd letter. Then he next gave me the rest of the letters. Then I asked about his other names. His last name was apparently Messiah but spelled Mesiy, or something like that, so I was able to tell him who the Messiah is.

The service ended by this time. We heard singing and went back to the sanctuary. He stayed close to me after that as we talked to a few people looking for a drink and a snack, and at one point standing in front of me with his back to me, he pressed into me and grabbed both my arms and pulled them around himself over his shoulders so that I was hugging him.

These are needy and unloved children who need a little bit of love from people who aren’t intimidated by their clumsy, often offensive and sinful attempts at trying to get attention. One often doesn’t have to put out much to be rewarded by affection or respect in return.

Atlanta RP Fellowship needs more workers. Lynette Bloedow and I have been here over 2 Lord’s Days. We’re moving on Monday morning. Pray for the work here.

Ministry to another boy at the Atlanta RP Fellowship:

The first boy I had to deal with was threatening to hurt at least one other person, a girl who was apparently among some children who were “messin’ with” him.

‎My wife took over dealing with him from another person who wasn’t in a position to address the problem. He had been taken upstairs just prior to the service starting or soon after it had started. After my wife went up some minutes later, she heard the 12-year-old boy saying he was going to kill that girl. She brought him to the top of the stairs and called to me to come up to deal with him because he was threatening people. I was sitting at the bottom of the stairs holding a much younger boy who was sleeping, so I asked her to bring him down to me.

Once she got him close enough, I quickly reached out and grabbed the waist of his pants and pulled him down to me, and he was left with me. He was not fighting to get free but I could feel the pressure of him trying to exert a measure of resistance to me holding him, and as I questioned him, he did tell me several times to let him go ‎.

He was not responsive at first when I asked him what was going on, but after several minutes, he started to respond. Meanwhile, he kept staring in the direction of the people he wanted to hurt, who were sitting around the corner of the “L”-shaped sanctuary room from where I had him. He had also been sitting there.

‎Essentially, he told me that the other children were “messin’ with me.” I had intervened in a dispute with him the previous Sunday in which he was saying the same thing, but his teacher said he was the one messing with them, so this was a two-way conflict. That incident was helpful for perspective in dealing with this latest altercation.

After a couple of his responses, I started to make the point that people who are angry at each other can’t simply escalate conflict by reacting angrily and vengeful back and forth. I told him that somebody has to decide to turn the other cheek and respond with forgiveness, rather than revenge and resentment. I mentioned that this was the lesson from Christ and the kind of message he was in church to learn.

There was a bit of back and forth and initially a bit more of an aggressive attempt to pull away as I talked, but then all of a sudden, as I was “preaching” to him, he relaxed‎ and stopped trying to pull away. Then he said a few times, “I’m OK now.”

He then said he needed his journal and pen. He also wanted his Bible and a Psalter. ‎I went across the sanctuary to get these things from where he was sitting and we followed along the Scripture reading together. He also sang a few lines from the Psalter during the next Psalm. He then started writing in his journal as Pastor Frank preached. At one point, he got up and said he wanted to show his Sunday School teacher what he had written so I had to hold him back and suggested he wait until after the service. Soon after that, I had to leave to deal with the other boy whose account I wrote up earlier. Pastor Frank’s wife, Penny, said he continued to write, and that he was taking notes on the sermon.

I didn’t hear any reports of bad behaviour after the service during their free time so his change of heart seemed to continue then as well.

I don’t know what the Holy Spirit was doing or what was going on in his heart, but the way he responded seemed quite dramatic. He seems to be the oldest in a loosely knit family that the Fellowship has been ministering to for several years.

What a remarkable providence of the Holy Spirit to change this boy’s demeanor as He did with effective confrontation and engagement that helped to bring out some of his better side.

Here are some prayer requests:

And as you continue to pray for us, be sure to contemplate coming to Atlanta for a visit, like the Bloedows.  Reservations are now being received at the Hidden Creek B&B (also known as our house) in order to facilitate a ministry-filled vacation.