August 2015―When Tim and Lynette Bloedow of the Russell (Ont.)  RPCNA offered to come to Atlanta to be of service to us for one week of their annual three week visit to the United States we were only too delighted to accept their kind offer and put them to work.  We did not realise, however, just how blessed we would be by their efforts.  To begin with we were unsure of what, specifically, we could ask them to do during the week but it dawned on us that they could be of great help with regard to the work we needed to do on the inside of our new building.  So we set about planning and purchasing supplies to paint as many rooms as possible in the time.  Being a handyman, Tim was also able to do some needed small repairs. 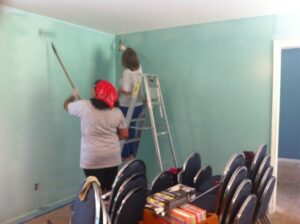 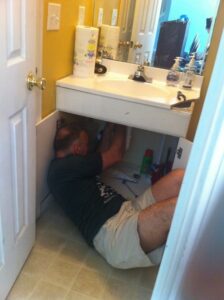 Tim (a student of RPTS), Lynette (from Trinidad and Tobago), Frank and Penny, along with Michele Haag and Rose Hillman got underway on the first day.  Over a period of three days we were able to paint the meeting room, the kitchen, the two Sunday School rooms, the upstairs hall and as much of the stairwell as we could reach.  Even the washing of the windows and the mini-blinds made a big difference.

On the evening of the first day of painting a National Night Out a was held on an empty plot of land on a corner across from Grace Store, in the back room of which the Muslin owner had allowed us to meet for several months during 2013.  To quote the National Night Out website, “it is a cohesive effort to promote involvement in crime prevention activities, police-community partnerships, neighborhood camaraderie and send a message to criminals letting them know that neighborhoods are organized and fighting back.”  It is held in many communities across the nation on the same night.  So after a few hours of painting we headed the four blocks over there and were able to meet and mingle with some of the residents and quite a few groups who are working to reduce crime in the area including city officials, the Federal Attorney’s Office, police officers and church personnel.  Tables were there not only for the hamburgers and hot dogs but also for board games. 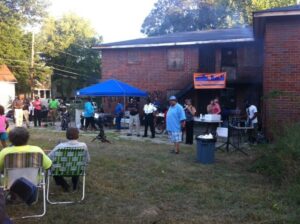 One of the speakers was Councilman Ivory Young with whom Frank, along with Pastors Camery and Anderson from Indiana had met in the Atlanta City Hall in November last year.  During that meeting Councilman Young outlined his vision for the city and prayed with the men.  He remembered Frank and was pleased to see him at the event.