May 2018―As soon as my daughter Lily and I stepped into the meeting room of the Atlanta Presbyterian Fellowship, we anticipated that this would be an experience involving the conventional and the unconventional. We were standing in an L-shaped living space in one side of a rented duplex. The room had rows of mismatched chairs arranged to accommodate 50 or so attendees.

The setup was quite unconventional and did not fit the standard RP model of worship. Or, did it? Both sections of the room had its chairs oriented to face the centerpiece of this unconventional sanctuary: the pulpit. Front and center in this affair is clearly the preached Word of God. How conventional and traditionally Reformed.

We were warmly greeted by Penny Smith, who said that her husband, Frank, was out and about collecting folks from the neighborhood. Dr. Frank J. Smith is the minister of this outreach effort, which was begun in 2010. Soon enough, Frank arrived and called Lily and me down to take a 9-cent tour of the area. I climbed into a dilapidated 12-passenger van that had seen its better days long ago. “Ding” sounded a hotel service desk bell that had been duct-taped to the dash of the van. Frank explained since the van often was filled with noisy children, eight dings meant to buckle up and two dings meant “QUIET DOWN!” There were only us three in the van, and two of us were too wide-eyed to require two dings. 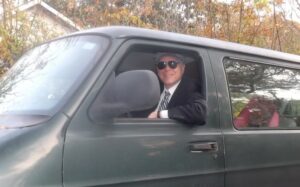 Frank chauffeured us through the 20-block communities of English Avenue and Vine City. One easily could spot deep decay in the physical and cultural aspects of the area. As we moved through endless stop signs and traffic lights, Frank informed us that this area of Atlanta is known as the Bluff.

As we drove, I noticed the people we passed. They did not walk; they shuffled. It was as if they were burdened with ankle shackles. Frank was a nonstop tour guide speaking of the area’s history and local interests, including the life and fate of C.J. Johnson, a college baseball star years ago. To the east of the Bluff, separated literally by one street, were several of the icons of success and grandeur in Atlanta, including the Georgia Tech campus and the now-imploded Georgia Dome adjacent to its impressive replacement stadium that sports a huge Mercedes-Benz emblem. This stark division was a classic urban example of the Haves and the Have-Nots. 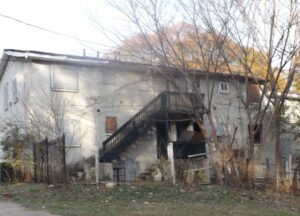 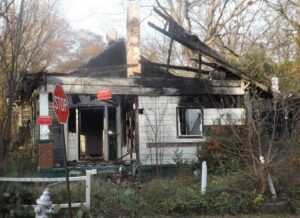 In typical Southern tradition, the Bluff is dotted with different houses of worship on every corner, including a building run by a Nation of Islam organization faithful to the original founder and another building run by those loyal to the Farrakhan-led Nation of Islam. Most of the churches are attended by Bluff outsiders and have essentially abandoned the local community.

All along our circuitous route Frank was sharing that “we worshiped there, we held Bible studies there, I preached in that church, I know this pastor well, so-and-so lives here.” Frank knows the Bluff.

In fact, Frank has invaded the Bluff. I began to realize that Satan owns most of the Bluff, and the destroyer has done his job well. Destruction and decay are all around. I also realized that the driver of this dilapidated van is an ambassador of King Christ and a visiting member of the victorious kingdom. This human representative of the true owner of the Bluff had arrived several years earlier and was now freely driving all over it, recounting how the King’s ownership of the Bluff is being exhibited.

For example, the Atlanta Fellowship has openly worshiped in the elements on the front steps of the formerly majestic, but now burned-out St. Mark African Methodist Episcopal Church. The Fellowship has held open-air Bible studies in the Vine City Park. The Fellowship was invited to hold its meetings in a storefront building in the center of the Bluff by its Muslim owner. Frank was invited to preach in a local Baptist church in order to demonstrate that racial epithets spoken against him were without merit. So, as ridiculous as it seemed, the railroad-engineer-cap-wearing, large sunglasses-bespectacled, duct-taped-bell ringing driver of this trashed van is and has been exercising Genesis 1:28 spiritual dominion over this satanically decimated patch of Atlanta. Pastor Smith has been actively and boldly redeeming the claims of Christ in the Bluff through the calling and power of the Lord Jesus Christ.

After making her own rounds to collect folks, Penny called Frank to ask if we should start the Sunday school as Frank, now without us, was making his second collection run, being slightly delayed by our last-minute tour. The L-shaped living room was now bustling with 35 or so people. And what a group this was. Half white, half black in numbers. People from every background. Children running to and fro. Infants in the arms of mothers. Apart from the Smiths, I counted at least four other faithful helpers: Amy Work, Sean and Anne McPherson, and Michele Haag. These helpers are solid young men and women who have heeded a call to invest their talents and energy into this ragtag group. 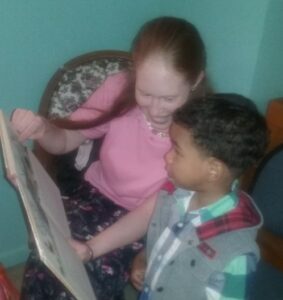 Sean led an absolutely masterful Sunday school class, eliciting much interaction from the congregation, who answered well and asked solid questions, such as about the relationship of God’s sovereignty and our free will. You would know the questions well—they were the very questions we all have asked at some point along our journeys toward theological understanding. This group is being grounded in biblical truth with a Reformed theological rigor. Upstairs, the children were being catechized and infants cared for by the squad of faithful helpers.

After Sunday school and a short time of loud and lively fellowship, the worship service began. All parts of the various family units were in attendance. I appreciated that Pastor Smith intentionally placed corporate recitation of weekly memory verses and Westminster Shorter Catechism questions prior to the formal call to worship. This was so that any present, including the children, could participate by reading the questions to the group, who responded with the answers, and no consciences were bound in reciting non-inspired catechism passages during formal worship. The service itself was exactly what one would expect in a Reformed Presbyterian church: preaching, singing, and prayer saturated in Scripture. Basic, simple, and sufficient. Highly conventional. 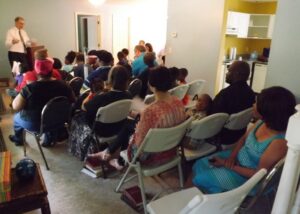 The worship service was also highly unconventional. There were some who understood the principles of the Reformation, the regulated liturgy, and the practice of exclusive psalmody. But there was also a second group who had no background in these matters, who likely have never uttered the word soteriology, and who would likely not know what the acronym EP stood for, much less be able to debate the propriety of exclusive psalmody in corporate worship. Yet here in the worship service in this L-shaped living room were these two groups of people sitting under the same ministry of the Word, singing the same psalms, and jointly praying as one people before the Lord.

Lily and I were warmly welcomed by the Smiths and the faithful helpers. But the extent of the hospitality soon ended, not because they ceased to be hospitable, but because we felt the need to give rather than receive hospitality. As those who have tasted the goodness of the Lord and experienced His kindnesses, Lily and I felt the burden and the pleasure of welcoming, engaging, and serving the various people in this crowded room of our Father’s house.

Some of these folks are the forgotten ones of our society. They needed to feel welcomed. They needed to know that they have a standing and hearing within this small room in which the Lord of hosts was present with us for worship. Were there distractions during the service? Plenty! Movements, crying, whispering. Some of the movements were from the faithful helpers and Penny, who were unobtrusively attending to the needs and mishaps of the people in order to keep the service proceeding orderly and quiet. When I say quiet, I’m excluding the amens and other affirmations heard during the sermon.

The pastor faithfully reminded the people of their biggest problem: it is not their relationships, not their housing needs, not foreign aggressions, but it is their sins before a thrice holy God. One realized many were indeed listening as evidenced by the sudden silence. At various crescendos of the sermon, such as when the pastor was relaying the words our Lord declares in His legal action of justification, “not guilty, not guilty,” all noises in the room ceased. One could hear a pin drop. And one could hear the relief and gladness of the people as hushed interjections of “amen,” “praise God,” and “thank you, Jesus” were voiced. This relief, gladness, and joy also translated in a mighty way into the singing from this group. It was loud. It was robust. It was heartfelt. I could not hear myself singing, and I was singing for all I was worth.

This was perhaps the most alive worship service I have ever experienced. There is something amazing occurring in Atlanta at the Bluff. This is no liberal, feel-good-about-my-selflessness social justice ministry. This is no unbiblical exercise of Marxist liberation theology.  This is the pure-and-simple gospel of Jesus Christ being proclaimed to a forgotten, discarded, and destroyed community. It is the gospel preached to all men everywhere.  The message is delivered with faithful words, but the message is also communicated in practice via the Fellowship’s genuine embrace, love, and service to the people of the Bluff. The message delivered in the power and uncompromised truthfulness of the Holy Spirit. The worship is confessional. The worship is Reformed. The worship is regulated. The worship is pure Acts 2 worship.

In the midst of gifted students at Georgia Tech who are cramming advanced material to excel on their Monday morning exams, in the midst of the throngs of faithful fans cheering the Atlanta Falcon football warriors in the shiny new Mercedes-Benz Stadium, in the midst of international businessmen who are strategizing future fortunes and powers across the street from the Bluff, on every Lord’s Day, there in the small L-shaped living room of the Atlanta Presbyterian Fellowship, for a few short hours and perhaps, for some, for eternity in the next age, the roles of the Haves and the Have-Nots are gloriously reversed. I pray that those in the Bluff who have responded to the call to “come out of her” and bend the knee to the true owner of the Bluff will come to fully understand this grand truth and great mercy. May our Lord be pleased to continue to bless the efforts being invested in downtown Atlanta.