July 2018―Two years ago, in June 2016, Atlanta Presbyterian Fellowship had the pleasure of welcoming to The Bluff a group of seven volunteers from one of our Indiana churches who styled themselves the Atlanta Seven.  It comprised seven people who each shared a heart for downtown ministry and wanted to be of service to us and the people to whom we minister.   Fast forward two years and now, in July 2018, we were thrilled to welcome a group of six volunteers, five from Indiana and one from Kentucky, which we dubbed the Atlanta Six.  One person from the Atlanta Seven, namely McCheyne McNamee, the son of elder Gary McNamee who led the 2016 delegation, was now a member of the Atlanta Six, as was Jenny Decker, the sister of Joy Decker, another member of the  2016 team.

The leader of the team was Parker Hilliard, who recently came under care of Great Lakes-Gulf Presbytery, which was his first step towards achieving his career goal of becoming a pastor.  Joining Parker, McCheyne, and Jenny, were Josh Erney and Trinity Myers, the thirteen year old daughter of Captain Chris Myers who, with his family, spent two years supporting our ministry by travelling the hour and a half to Atlanta from near Fort Benning for worship services almost every Lord’s Day.

The sixth member of the team was Tré Cranford, who had been ordained in another denomination, but is now a ministerial candidate in the RPCNA, spearheading a new church plant in Louisville, Kentucky. 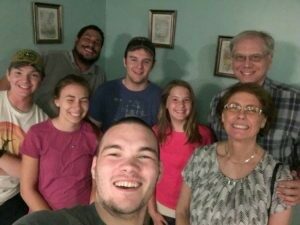 It so happened that we had been thinking about replacing the carpet in the duplex, which we would tie in with a Vacation Bible School.  So plans began to bring a group of young people to Atlanta, and Parker took the lead, with the Columbus, Indiana, session overseeing the effort.

When the team rolled into the driveway of our home on Saturday evening, July 14th, we were delighted to find that Jenny had completed a college course in interior design and was the perfect person to guide everyone else through the somewhat daunting task of carpet replacement.  Prior to the team’s arrival, some initial work was done: Pastor Frank ordered 1100 square feet of random carpet planks which are similar to carpet squares, and which, unlike wall-to-wall carpet, do not need professional installation.  Because of their being random, they were very cheap.  Also prior to the team arriving, Pastor Smith arranged for two of our local attendees (along with a husband and wife whom he knew as a result of his teaching at Georgia Gwinnett College who volunteered their time) to remove most of the grungy, worn out and badly stained old carpet, which speeded up the floor prep on the Monday morning.

Before Monday arrived, however, the team played an important part in the Lord’s Day services.  Tré preached for us both morning and evening, and Parker led the adult Sunday School class.  Everyone introduced him or herself, interacted well with our congregation, and was very quick and ready to deal with any and all issues that arose, from keeping children under control during worship, to talking calmly while witnessing to a variety of people including a homeless man dealing with schizophrenia as well as drug addiction issues.

On Monday morning the floor planks, tied up in bales just like hay, were picked up by Pastor Smith and McCheyne in a rented pick-up truck. 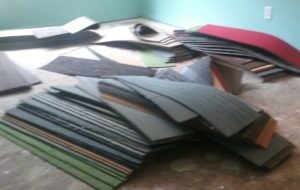 After the planks were hauled into the duplex, Jenny and other team members arranged them from a random mass into colour-coordinated piles so that they could be laid in attractive arrangements. Here are Jenny and Trinity starting on the worship room: 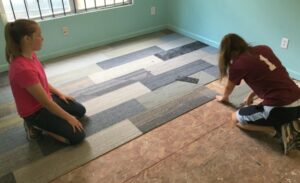 Simple patterns went down pretty quickly, but more sophisticated patterns took much longer. Here are some examples of finished rooms: 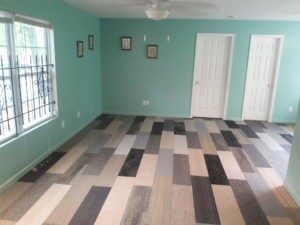 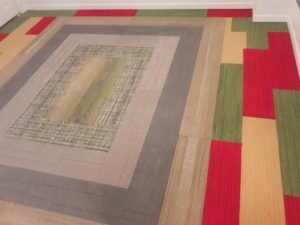 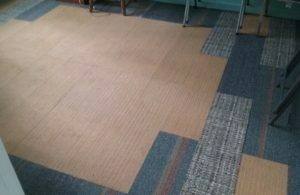 While Jenny, along with Trinity and Josh, worked on the carpeting on Tuesday, Pastor Frank, Parker, Tré, and McCheyne went door-to-door in pairs distributing about 500 flyers advertising VBS. In the afternoon they elicited the help of two of our regular young ladies, Miyani and Diamond, both of whom enjoyed the experience.

Between putting down the new flooring and starting VBS, the team took an afternoon off and drove to a local beauty spot, Amicalola Falls, which, at 729 feet, is the tallest waterfall in Georgia and the fourth highest east of the Mississippi. Here is Josh’s obligatory “selfie”: 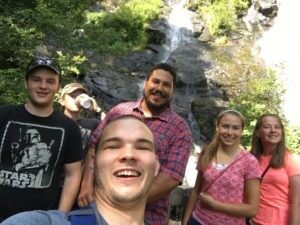 Vacation Bible School, on Thursday and Friday afternoons from 4:30 to 7:00, went very well, with 42 people in attendance on both days.  On Thursday there were 25 children and 17 adults, and on Friday we had 24 children and 18 adults.  We include adults in our VBS because a number of our local people enjoy taking advantage of any opportunity to learn.  The team prepared for this by having Parker lead an adult class on how to study the Bible, while the other members prepared lessons for the children which revolved around a skit each day.  The adults wanted to see the skits, so their classes were held during the children’s game and craft times.

Each day, the whole group warmed up with some singing, including a song based on Joshua 1:9: Do not be afraid, nor be dismayed, for the LORD your God is with you wherever you go. 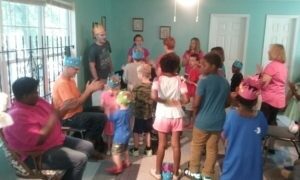 On Thursday they, somewhat hilariously, told the story of Moses pleading with Pharaoh to “let my people go”, complete with representations of the plagues, and the parting of the Red Sea.  Emphasis was put on the fact that the Lord was sovereignly in control of these events.

There were also games and crafts for the children, and Chick-Fil-A kindly provided chicken sandwich boxed dinners for thirty of the attendees.  Pastor Smith brought in Burger King cheeseburgers to make up the difference in numbers. 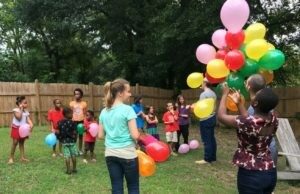 Friday also went well with a continuation of the adult class, and a different story for the children’s class, this time depicting Joshua and the Battle of Jericho.

Much effort was put into creating a brick wall comprising lunch bags stuffed with newspaper which would fall down at the appropriate time: 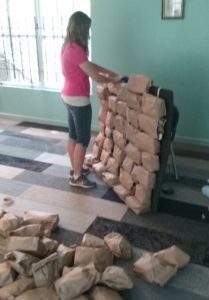 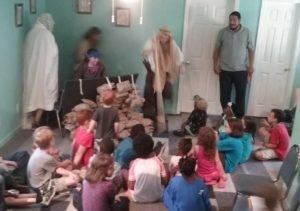 Tré was the narrator, and he made sure that the children understood the significance of this historic event.

It is difficult to express the appreciation we feel for the Atlanta Six and what they achieved in one week. Not only did they perform, exceptionally well, all that we asked of them, but whenever they became aware of anything that needed doing such as touch-up painting, or cleaning, or repairing all kinds of things, they just got on with it, including laying fresh new vinyl flooring in one of the bathrooms. They even dealt well with providential mishaps and irritations such as a flat tire.
Everyone on the team worked extremely hard, putting in very long hours, on one occasion pulling into our driveway at two minutes to midnight!

We give thanks to the Lord for sending us such a talented group of young people who showed such tenacity and creativity in getting so much done.  The result was an amazing renovation of the interior of our building, which had become quite shabby and was not a good example to our flock or our neighbours.

In addition, the word of the Lord was faithfully preached through another servant’s voice, and instruction in how to read the Bible was given.

Parker, Josh, McCheyne, Jenny, Trinity, and Tré were a wonderful example to the people to whom we minister in terms of their godly conversation, their warmth and even the fact that they remained cheerful, showing a real sense of humour throughout the whole week.  We are also grateful to the Columbus session for their generosity in using a portion of their missions budget not only to cover the team’s expenses, but also the cost of the new carpet!

We have now negotiated the terms of our lease for the coming year, and the owner of the duplex has agreed to a monthly rent of $950 per month instead of the $750 we have been paying.  This is still less than the going rate for the area of $1100 per month.  This lease, however, will expire at the end of August 2019, at which time, given the gentrification of the area, the owner may decide to upgrade the facilities and change from having monthly renters to weekly renters at $1,000 per week!  So please be in prayer for us that, between now and then, the Lord will lead us to new facilities and, if it be his will, to something which we can purchase as our own.