January 2015―At the annual meeting of Great Lakes-Gulf Presbytery in February 2014, Atlanta Presbyterian Fellowship was adopted as an “official outreach” of the Presbytery, which is similar to a preaching station.  It had previously been under the authority of a local church session but when that church was reduced to a preaching station itself, APF came under the jurisdiction of the Southern Church Extension Committee (SOCHEX).   The Presbytery voted at a following meeting, held in June during the week of Synod, that if five qualified men could be found, a commission would be appointed instead and that it would report back to Presbytery at the spring meeting next year.  It was not until August 11th that we were informed that five qualified men had been chosen, and on November 14th we welcomed two of them, Pastors Jason Camery and Shawn Anderson, to Atlanta.  Pastor Frank had lined up a meeting with a city councilman, Ivory Young, in the city hall for the Saturday and at this meeting they discussed his vision for the English Avenue/Vine City neighbourhoods, which he represents.

The next day, November 16th, our visitors joined us for a worship service at Northminster (at which we had 28 in attendance) followed by a fellowship meal.  Later that afternoon we had a record 45 in attendance at the Atlanta service which was followed by a coat distribution.  As we had a lot fewer coats and blankets donated than last year we were unable to make the distribution available to the whole neighbourhood—only to those who came to worship.

On January 4th, we posted new record figures: 50 people in attendance including 29 children.   The following week we were down in numbers of children for a variety of reasons and we had a total of only 33 people.  Attendance has, however, been steadily climbing.  Our Atlanta ministry in its first year (2009) averaged 7.  The year we moved to the Bluff (2010), our overall average for the year was 10.  We averaged 13 in 2011; 12 in 2012; 16 in 2013; and 23 for the whole of 2014.  For the last three months of 2014, we saw a significant increase, with an average of 30.  As we have mentioned before, we are growing too big for our current facilities and are praying earnestly that the Presbytery will give us the go-ahead to be able to rent or purchase something larger.  Thankfully, a 12-passenger van has been donated to us to transport our congregation to and from Sunday School and the worship service as none of our regular attenders who live in the inner city have their own transportation.

On January 9th, 2015, we welcomed Pastor Phil Pockras and Elder John Hanson to our home for the weekend.  The following day, Saturday 10th, Pastor Frank took them into Atlanta where he had made arrangements to meet the realtor who was selling a church property that we may have been able to afford to purchase as a permanent location for the ministry.  Mr. Hanson inspected the building and found it unsuitable for our needs without very expensive repairs.  He did think, however, that there were other properties in the area that may work for us.  We have a Christian realtor who is looking for appropriate buildings on our behalf and is willing to assist us with regard to zoning issues, etc.  Pastor Pockras preached at Northminster the following afternoon, at which we had 19 people in attendance.   The two men were favorably impressed by their experience at Atlanta Presbyterian Fellowship where they enjoyed meeting and interacting with the congregation. 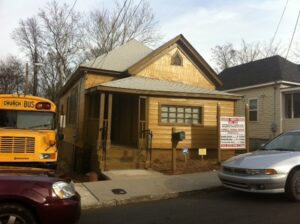 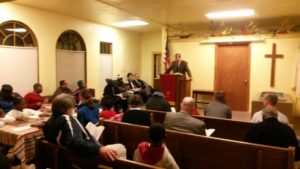 We have been blessed by some of our parishioners commenting on the way that they are learning things about the Bible that they had never known before.  One such example, from a 58 year old man, is that, despite being raised in the church, he had never realised before that Jesus was God.  Pastor Frank meets with him regularly to disciple him in the faith.  Another man, in his mid-60’s, visited his previous congregation and told the pastor he was now attending “the Presbyterian church”.  He wants to go back and tell the preacher there that he ought to come to the Presbyterian church to learn how to preach!  Frank also meets with a couple who had been living together outside the bonds of matrimony but who came to realise that this was wrong and that they needed to get married.  The ceremony was conducted after the worship service on the first Lord’s Day in the New Year.  We have begun a mid-week Bible study and prayer time which is meeting every other Wednesday evening.

Following Vacation Bible Study in June, we started to be inundated with children, the older ones of whom are ministered to by Miss Amy Work, and the younger by Miss Jerusha Wheeler.  Miss Amy is very concerned about educating the young people in her Sunday School class and has prepared lessons based on J. I. Packer’s Knowing God.  Results vary, but one Lord’s Day earlier in the year as the lesson time drew to a close, she said that she wanted those in attendance that day to pray out loud.  Right away she got a volunteer to start the round of prayer and then the others volunteered to follow on.  And she was surprised and delighted at the result.  However, as the number of children has increased it has been more difficult to get them to concentrate for very long.  The seating arrangement in the church building is not conducive to large numbers being able to get into manageable groups as well as trying to coexist, given the noise that is generated.

We were blessed early in 2014 when Army Lieutenant Chris Myers and his family, including four young children, moved to the Fort Benning area from Harrisonburg, Virginia (where they are members of our RPCNA mission church) and started attending regularly.  Given the distance at which they live, they make the journey approximately every other week.  Chris, who is a licensed preacher of Presbytery of the Alleghenies, has been of enormous help, producing a very attractive website for the ministry and assisting in any way he can.

The Lord has brought us a new helper, Mr. Paul Struwe, a high-school teacher from Midway Christian School, who travels about 45 minutes every week to be a part of the ministry.  He has also substituted for Amy, teaching the older children when she has been away.

Many of you may remember that at the meeting of Synod in June 2014 the Trustees of Synod distributed cute little blue plastic piggy banks to all the organised and mission churches to encourage collection of donations for Reformed Presbyterian Missions and Ministries (RPM&M).  Even though Atlanta Presbyterian Fellowship is not an organised or mission church, the project facilitator was kind enough to allow us to bring one home with us.  It has been a big success in Atlanta as it encourages both children and adults to start giving to the church.  One man folded up a bill until it was tiny enough to fit through the coin slot, saying he wanted to put it in there rather than into the tithe box!  And the children love it.  Two children, Talayla and Tranese, whom we first met as a result of VBS, attend most Lord’s Days with their mother and they sometimes bring their half-sister, Tierra.  (Together the girls are known as the three T’s!)  The mother had arranged for Talayla and Tranese to acquire candies to sell in order to have coins with which to feed the hungry pig almost every week.   One evening when Pastor Frank was reminding the congregation about the piggy bank he shook it to show how many coins were in there already and the bottom fell out, scattering coins all over the place.  Naturally this brought a lot of laughter as the children rushed up to pick them all up and feed them back into the slot.  We were able to send almost $60 to RPM&M in the fall and now, only a few months later, the pig is almost full again.  This is good training for people who have not thought about supporting a church and its ministry before. 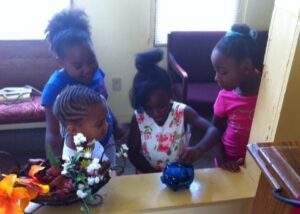