June 2015―We held our first worship service in our new building on Sunday, June 7th.  We were able to take possession a few days beforehand and had a number of people, including three of our teenagers help us clean up and get organized.  In preparation for the Lord’s Day we set up thirty two folding chairs which had been donated to us, with some of them in the worship space and some in each of the two Sunday school rooms, in the knowledge that they would have to be moved into the worship area between Sunday school and worship. 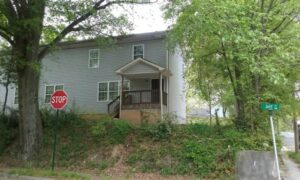 When we arrived for the service on Sunday, on one of the hottest days of the year so far, we discovered that the air conditioning was no longer working, and it appears as though about three feet of copper piping (valuable in the drug community) had been stolen from under the building causing the Freon to run out onto the ground.  The ceiling fan does not work well, being off-balance and having only a medium speed.  We were able to get a bit of a breeze by opening windows.  More donated chairs arrived giving us a total of 58.  In spite of the discomfort, and with Pastor Smith, very uncharacteristically, discarding his coat, we were still very excited to be in the new building. 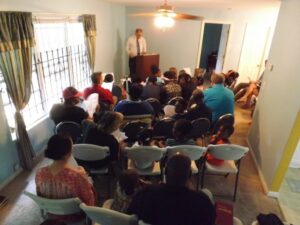 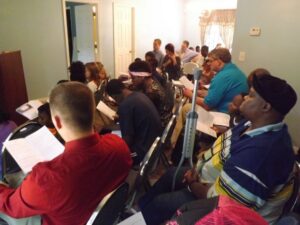