[We are pleased once again to welcome to “Penny’s Pen” our guest blogger, Miss Amy Work, who serves as our Sunday School Superintendent.]

May 2016―Lately, I have been learning about big things and small things, and that my perception of their effect is usually way off.  What I perceive to be a big deal turns out to be much smaller than I thought; what seems small and insignificant to me ends up being a much bigger deal than I ever imagined. Let me explain.

I’ve been leading my Sunday School class, comprising middle school age kids, through a study of 1 Corinthians 13.  One week, we were focusing on “Love suffers long and is kind.”  It had been one of those disruptive and distracting days, and I was really struggling to maintain both my classroom management and my cool.  Before I knew it, it was time to end class.  In fact, we were already late, and I was feeling the time pressure to get downstairs and settled.  One class holding up the show has a ripple effect on the kids already downstairs on time.  They get bored, which leads to them getting rowdy, and that makes calming them down and focusing everybody for worship much more difficult and time consuming.

Knowing that I had new kids in the class who were unfamiliar with our procedures, I wanted quickly to explain how to take notes, and my expectations.  “Ok, guys, as you line up, let me just quickly go over why you’re taking your notebooks and pens downstairs.  What we do—”

I stopped, opened the door, and found a pair of bright brown eyes and a small impish face grinning up at me.

“Hi, honey. You need to stay in your classroom.”

I shut the door, called for the class’s attention, which took a moment to regain, and then began again.  “So, during the worship service, we use the notebooks to—”

I glanced at the clock as I opened the door again.  We were really late.  I just needed two minutes to give simple instructions.

The little girl giggled and ran back to the head of her class’s line.  What a fun game!  “Sorry, guys,” I said, taking a deep breath.  “I just need to tell you—”

This time I wrenched the door open.  There stood Miss Penny.  I was sure she was there to fetch us down to worship since we were seriously late by now.

“Ok. Well, we just need to use your bathroom,” Miss Penny sweetly explained.  I stood aside and let a mother and young child come through to the bathroom.

My face was burning as my class looked at me.  I became intensely aware that I had just spent the last hour teaching them to love others with longsuffering love and patience, and we weren’t even out of the room before Miss Hypocrite showed them a shining example of what not to do.

And that’s about when I began to consider the effects of what I had done.  What a failure.  What kind of teacher was I when I didn’t practice what I preached?  What kind of witness was I being to these kids?  How could I be worthy to represent Christ to these kids?

Throughout the following week, my injured pride allowed the guilt of that failure to hang over me. But, by the next Sunday, I was determined to make it right.  While I had apologized in private to Miss Penny, I wanted to make my mistake into a learning opportunity for the whole class.  The kids needed to know how to handle things when they messed up, as I so clearly had.

So, the next Sunday, we reviewed the passage up to the fateful “Love suffers long and is kind” verse.  “So, guys,” I began.  “Remember last week when I lost my patience with Miss Penny when she knocked on the door at the end of class?”  I waited for the snickers and the shared knowing looks.  All I got were blank stares.  They had no idea what I was talking about.  This thing that I was sure was such a big failure turned out to be a very little thing in their eyes.  I did go ahead and use it as a learning opportunity, though, and reviewed how mess-ups like that should be handled.  But, my perception of the devastating impact that my personal failure would have to the progress of the ministry and to my relationship with the students was, in God’s gracious mercy, way off.

Then there are the small things that end up being much bigger than I imagined.  One day, one of our regular attenders brought a small stuffed toy to class.  Now, this is a very bright young man with a stubborn streak to match my own.  We have gotten into a number of battles over whether or not he will comply with instructions. Building a relationship with him has been challenging.

As a teacher, I am sometimes overcome by goofy moods so, one day, on my initiative, we all chose nicknames for ourselves, and I had to refer to the kids exclusively by their nicknames.

“Yes, Batman, would you like to add to that?”

“Cool Cat, put that down and stop bothering Sonic.” 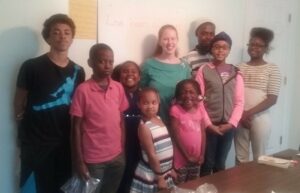 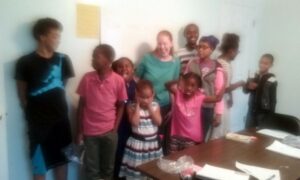 before bursting into laughter in Sunday school!

Well, on the day in question, I was in another of my goofy moods.  When the aforementioned boy entered the classroom, he was walking on his knees as he carried that stuffed toy.  (As a side note, that boy never enters or exits the room normally!  Last week, he balled himself up and rolled in.)  Anyway, he propped the toy up on the table, and I immediately addressed the toy as though it was a new visitor.  I carried on the game through the whole lesson: I wrote down the toy’s name on my attendance chart, to the owner’s immense delight (“Look, guys!  She really wrote his name down!  Look at that!”).  I required the toy to read the verse along with the class—a bit of a sneaky trick since one of our battles is this boy refusing to read the verse with us when I know he is more than capable of doing so.  I asked questions of the toy and allowed the toy to give input to discussions.  I even had the toy write a prayer along with the rest of the class to close the lesson.  All through the lesson, this young man was more compliant, controlled, and engaged than I’d ever experienced.  It was like magic!  Before going down to worship, I told him that he could either leave his toy in the Sunday school room or put it in my bag where I carry all the confiscated items (phones, sunflower seeds, notes being passed, ipads, etc.).  He opted for my bag.  Under his careful supervision, I nestled the toy comfortably into my bag.

The next step in the day is ensuring all my students are seated appropriately: those who need note-taking assistance are seated next to me, those who are too chummy and distracting are separated, and those who are independent note-takers may choose where to sit on their own.  This boy is an independent note-taker and generally chooses to sit far from me, but directly under Pastor Smith’s nose, which I think is a good place for him.  I was noticing that several of my students were lingering in the kitchen getting drinks instead of finding their seats.  I went to chase them out.  “Ok, guys.  Take a last sip and then we need to find our seats.  It’s time to start.”  I addressed this young man directly: “You too. Let’s go.”

He didn’t move.  He didn’t say a word, and he certainly didn’t do as I asked.

Calling him by name, I said more firmly, “Go find your seat.”

He merely blinked up at me, still saying nothing, and inched closer to where I was standing. That drove me nuts.  He did this all the time.  I’d tell him to do something, and he’d just look at me with that insolent expression.  Why wouldn’t he obey?  Why was he still just standing there beside me? Then it clicked: he wanted to sit next to me!  He wasn’t choosing his seat because he was waiting for me to choose mine!  I gave him a hug and headed off to a strategically located seat, closely followed by a grinning boy.

We got settled and the sermon began.  It was like I was sitting next to a completely different kid. Gone was the boy who was either sulky and sullen or mischievously pushing every boundary. This version of the young man was fully engaged, making relevant comments and asking thoughtful questions throughout the sermon.  It was almost to the point of becoming a distraction, but I couldn’t bring myself to silence his enthusiasm.  It was amazing.

Since that Sunday, he has chosen a seat as close to me as he can get. Now, I suspect that a primary reason he wants to sit next to me is to monitor my note-taking progress to ensure that he takes more notes than I do. The deal is, anybody who takes more notes than I do can earn two stickers instead of one.  However, there is a change in him, and the small, seemingly insignificant act of being goofy with his toy opened a door for me to connect with this boy who sincerely seems pliable to the workings of the Spirit.

There are dozens of examples, I am sure, of small things that have had an unexpectedly large impact.

– The two-sentence note I quickly jotted to a teenager telling him I missed him since he had been gone for the last couple weeks brought him to church the following week.  He made sure to tell me it was because of the note.

– The games we play up in the Sunday school room before class starts build our sense of community without our even realizing it.  I watch the reaction of a teenager when he finally gets the hang of the game and wins a round, after long being intimidated by the complexities of the game and refusing to play with us.  It’s so important for a guy like that to have a win, however small, in some area of his life.

This ministry is a Goliath of a task. There are major, major issues among the people, and it is overwhelming to see all the work, effort, struggles, and cares in which Pastor Smith and Penny engage.  I suspect that what we know of the details of their work is just the tip of the iceberg. We deal with big sins, big problems, and big failures—lots of big things.  But, I’m learning firsthand that the God who brought down Goliath with one little stone—a small thing that had a very big impact— is our same God.

My prayer is that while we work to deal with the big things, which are truly small challenges compared to God’s power and plan, we will also be mindful of and prepared for the small opportunities that come along, which can end up being the tottering steps we take along the path of righteousness.  Enough small steps—enough small things—put together can add up to some pretty big, pretty wonderful things through the power of God.  May His kingdom come and His will be done in both the big things and the small!