July 2016―The temperature in Portland, Maine, on July 1st was a balmy 79°.  Balmy, that is, compared with the 90°+ temperatures we had been experiencing off and on since late May in Georgia.  Pastor Frank and I were visiting the city on a short vacation following Synod in order to add three more states (Maine, New Hampshire and Vermont) to the forty-two that Pastor Frank had already travelled by train, leaving only one remaining (Oklahoma) of the forty-six states which are served by Amtrak. 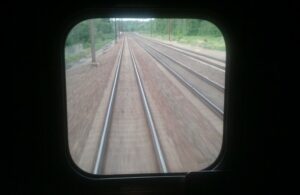 The view from Amtrak’s train No. 19, the Crescent

When we are away from home Pastor Frank and I also enjoy visiting local church buildings that have some special significance, and in Portland, this was the Orthodox Presbyterian building on Neal Street, located in an historic area of the city.  Not having a car, we travelled into the city by train and bus and thence by foot the half a mile or so along Neal Street to Second Parish OPC. 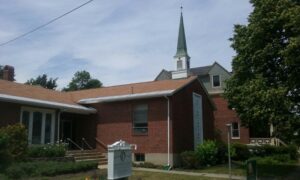 We had not spoken to anyone at the church to tell them that we were hoping to stop by, so we were quite delighted to find the pastor there. He was glad to see us and very willing to show us around and share some of the church’s history. The original church building with its beautiful white spire which had towered over Portland, had been too costly to maintain and, without a thought for its historic value, was demolished in the 1950’s. Their current building is a more modest red brick edifice but still a very attractive building which meets the needs of the congregation well.

Neal Street, Portland, is located in an old section of the city as evidenced by the charming row houses with their elegant facades, bow windows and stately front doors. It is a delightful and very photogenic avenue lined with mature shade trees on one side of the narrow sidewalk, and adorned with small bushes and flowering shrubs thriving in the little patches of soil and sunlight on the other. 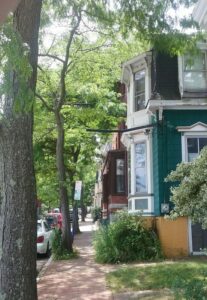 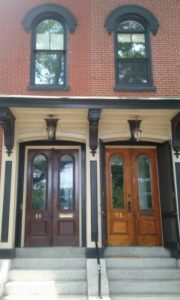 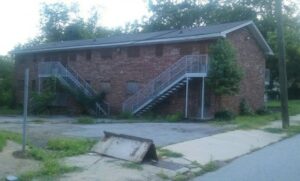 In Neal Street, Atlanta, other than a few exceptions, the buildings are in bad shape.  Many, such as the one pictured here, have been abandoned and boarded up.  Others are falling down or have burned down.  Several children from Neal Street used to attend APF, and they were among the worst behaved group we have had to deal with.  They were very destructive, causing hundreds of dollars worth of damage to the front porch of the small Baptist church from which we were renting at the time.  We referred to them, for understandable reasons, as the Neal Street Gang.  On one occasion an eight year old in the group struck out at me as I was taking his cell phone away from him following several attempts to stop him playing with it during Sunday school.  These children were warned repeatedly about their behavior and their parents were informed.  Every so often they were told that they could not attend for one week.  Even then on one occasion, they showed up after the service, adopted a very menacing attitude and demanded snacks. Eventually they decided they didn’t want to come back and we never saw them again. Neal Street, Portland vis-à-vis Neal Street, Atlanta:

We know that others have been called by God to reach out to the prosperous Neal Streets of this world.  However, having received our own calling, we continue to strive to reach the children and adults of “our” Neal Street and the surrounding ‘hood known as the Bluff.  And as we do so, we want to express our gratitude for your financial support, your notes of encouragement and your prayers as we sow with tears even as we look to our Saviour who is the Lord of the harvest.