August 2017―In the last issue of Penny’s Pen we reported on the celebration of Miss Rose Hillman’s birthday in January, when we surprised her with a birthday cake.  She was 55 years old.  But now, it is my sad duty to tell you of her death.

Rose started feeling poorly in early April but, however sick she felt, she still dressed up and came to church for as long as she could.  The last couple of times she attended it became obvious that she was in considerable pain, specifically, she told us, in her side.  She was eventually diagnosed with stomach cancer and she passed away on June 23rd. 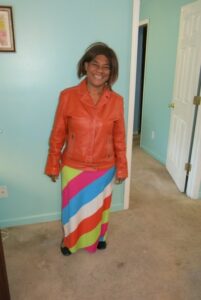 Everyone remembers Miss Rose as being a very sweet person.  She was loyal, faithful, and had a servant’s heart.  She worked hard and was always volunteering to be of help in whatever way she could.  And she did so with a big smile.  She is sadly missed.

When it became obvious that her life on Earth would soon be over, Rose’s family asked Pastor Frank to conduct her funeral service, but that didn’t work out because, when she did pass away, it was only a little over a week until we left for a vacation in the UK.  So it was conducted instead at a funeral home.  However, when we returned to Atlanta, we held a memorial service for her at our church building, which four of her family members and a friend of the family attended.

The sermon at the memorial service was entitled “Counting our Days”, an exegesis of Psalm 90, verse 12.  This psalm, which was originally a prayer of Moses in which he reflected on the shortness of life, urges us to be wise in how we live.   Utilising the entire psalm, Pastor Frank talked about what it means to count our days, and why we should do that.  Rose, he told us, lived 20,234 days which may seem like a big number but, in point of fact, it is a finite number, and every second moves us closer to the end of our days.  And, of course, when our days are up, we enter eternity.

Knowing this, we count our days so that we may seek wisdom.  What is wisdom?  Pastor Smith made the point specifically to those who live in the Bluff, especially the children who were present, that on one level, wisdom means not getting into trouble: for example, not getting addicted to drugs and not doing stupid things.

But the wisdom of which Psalm 90:12 speaks is much deeper than that.  True wisdom, he averred, is based on knowledge of God.  It shows itself in repentance of sinful deeds, and in faithfulness.   Miss Rose, he said, showed faithfulness, not only with her servant’s heart but with her faithful church attendance even when she was in physical pain.

True wisdom is found in the word of God, and Miss Rose also showed her commitment to this by hanging on every word that the pastor spoke.  And, even though she was illiterate, she would be able to join in the singing by hearing and lip-reading so quickly that she could reproduce the words immediately and sing along with us.

Towards the end of the sermon Pastor Frank made the point that Miss Rose, in her simple way and with her simple commitment, was wiser than many people in this world who may have a lot of knowledge and intellectual ability but reject the gospel of Jesus Christ.

Finally, he said, we should all count our days and respond to the gospel now, because we don’t know how many days each of us has left.