Allow me to begin with an apology for the many months that it has been since I last wrote, and to bring you up to date with an account of some of the Lord’s blessings as well as some of the difficult issues with which our mission church has been challenged so far this year.

First of all, looking back, the new year started off with an unexpected problem, when, on the first Lord’s Day, we arrived at our church building to find that vandals had tampered with our locks and we couldn’t insert the keys, meaning that we had to call for a locksmith. While waiting about an hour and a half to get in the door, we enjoyed some cheerful fellowship in mild weather and sang a few Psalms.  Even though we had to cancel Sabbath School, we were able to hold the service, after which Mrs. Nancy Pattillo purchased and installed new locks for us. 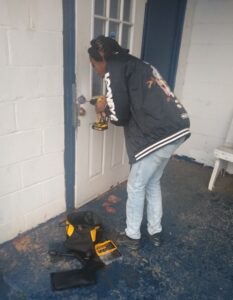 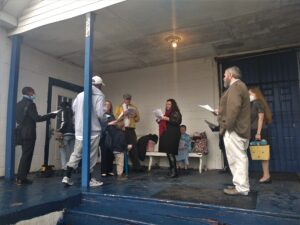 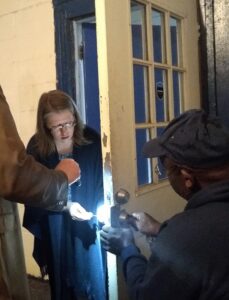 We also began the year with a couple of tough and somewhat tricky issues on our plate, namely that we were coming close to having to conduct disciplinary action against one of our members, and were unhappy with the behavior of one of our regular attenders which we had to find some way to deal with.  This took a lot of our time and energy and was, honestly, quite distressing while still having to deal with the other aspects of a very difficult ministry.

Pastor Frank was really exhausted by spring of this year to the extent that many people told him (and me) that we HAD to take some time off.  So, it was agreed that we should take a 5-week sabbatical, with our Sunday duties being taken over by our intern TJ Pattillo and his wife, Nancy, and our weekday duties taken over by a newly formed benevolence committee made up of four members of our congregation led by our intern.  The sabbatical was due to run from May 25th to June 30th.  Frank was to “maintain radio silence” and we were to leave everything to other people to deal with.

The day after our sabbatical started, however, we and our intern and his family came down with Covid, and the following Lord’s Day the service at ARPC had to be cancelled because there weren’t enough staff to open the building or coordinate transportation.

Meanwhile my kitchen and part of the dining room had flooded because the instant hot water tank under the sink had leaked.  It seemed at first that the only damage was to the flooring in both rooms but, nearly a month later, it was discovered that the bottom cabinets were damaged beyond repair and there was a buildup of mold on them and the wall.   Thankfully, our homeowners insurance company agreed to cover the costs of repair and renovation, starting with drying everything out and killing the mold. The kitchen was tented, loud equipment which exhausted a lot of heat was brought in, and the temperature in there was 94⁰ for a week.  Then everything was ripped out and it took until late September to rebuild it.  Going through something relatively minor like this has given me more empathy for the people who not only lost homes during the recent hurricane but for those who, while not losing their entire home, have had to deal with much more extensive water damage than I did.

Early on in the sabbatical, Frank learned that his contract with Georgia Gwinnett College where he had been employed for ten years would not be renewed.  Effectively, he had lost his job and, as we learned later, our health insurance as well.

One bright spot, however, was Frank’s participation in the joyous occasion of the installation of Drew Poplin as associate pastor at First RPC Durham, North Carolina, on June 10th. 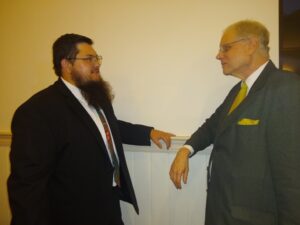 There were a number of additional challenging issues that the Lord brought into our lives during our sabbatical resulting in my not being able to accomplish any of my personal goals and in Frank only being able to work on one of his.

It was a blessing, however, that, on four of the five Lord’s Days during that period, we were relieved of having to make the difficult and occasionally horrendous journey into Atlanta.  Also, if we had not been on sabbatical during those five weeks, the various challenging and time-consuming providences would have been even harder to handle.

Maybe more importantly, as a result of our experiences, there have been times of deeper prayer.  What we went through brings to mind Psalm 119:71: “It has been very good for me That I was humbled low. It through affliction was that I Thy statutes came to know.” And so, we thank the Lord for His goodness to us and His preserving of us.

Since the end of June, we have been putting extra effort into our church building which was originally a broom factory built in 1947 and has been in serious need of repair and renovation ever since we started meeting there in October 2019.  Not least of our problems is that we have suffered a number of flooded areas following heavy rainfalls.  We know we have had a moisture issue because of a musty aroma when we first come into the building.

We had been seeking professional help from a variety of tradesmen in our area of Atlanta but were unable to find anyone reliable.  By God’s grace a number of men from White Oak ARP Church in Senoia, Georgia, spent a day with us in July 2020, demolishing the baptistry and removing a great deal of unusable/unneeded/trash items that the previous church had left behind.

In June of this year, and again, in September, men from Covenant Presbyterian Church (OPC) in Buford, Georgia, assisted by several of our church members, removed the water-stained acoustic tiles and the track on which they rested, floor tiles which had become loose and dangerous, along with more unneeded/unwanted items, and demolished three unwanted rooms made of two-by-fours and panelling which were not original to the building.  They also removed the old panelling from the worship area.

That wonderful volunteer work has left us with a much clearer idea of what is left to be done.  We have been talking to a mold and mildew expert about removing the mold and preventing it from returning and are also working to get a roofer to fix roof issues and a carpenter to replace rotten wood in the ceiling. Those are the most important priorities, and will be followed by drywalling, bulletproof windows, panic doors and electrical and plumbing issues. 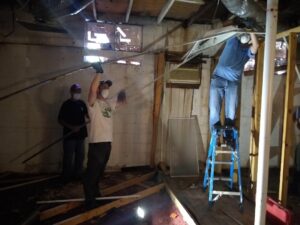 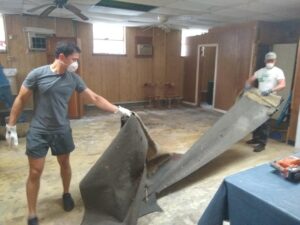 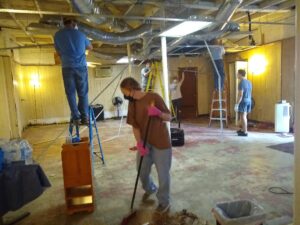 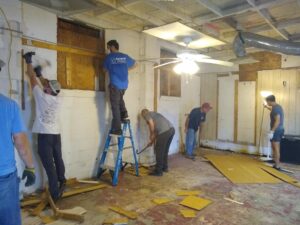 Thank you to everyone for your prayers for our ministry.  I hope that this article has given you a helpful update on the challenges and blessings that the Lord has providentially brought our way this year.

Praise the Lord for the following blessings:

Please continue to pray for us, however, specifically for the following:

And we know that: Unless the Lord build the house they labour in vain that build it.  Psalm 127:1.