July 2014―We are frequently asked how the ministry in the Bluff began. So I thought I would step back a bit and write an article describing the means by which the Lord led us to this location.

It all began shortly after Pastor Frank and I moved to Georgia in late 2008. In order to provide an income for us, Frank sought work as an adjunct professor at colleges in the area and soon found employment at Atlanta Metropolitan College, catering mostly to African Americans. It was a long commute, requiring about a 35 minute drive to the MARTA commuter rail station, a 45 minute ride on the train and an 11 minute bus ride to the edge of the campus. With wait times and walking times it meant at least an hour and a half commute each way. Frank was ministering at the mission work in North Atlanta at the time (later to become Northminster RP Church) and when it became obvious that there was no interest in an evening service, and a couple of attempts failed at starting a Bible study in a distant area in which one of the members lived, he decided to begin a Bible study at the college campus. This outreach started in March, 2010.

During this time, when Frank was having lunch and discussing various church matters with a friend who was a deacon at a church in a conservative Presbyterian denomination, he outlined his vision for inner-city ministry. This man asked Frank if he really wanted to do this and, when Frank answered in the affirmative, he quoted from the movie Amazing Grace in which the aging John Newton told William Wilberforce who was fighting to put an end to the slave trade, “Do it, man, do it!”

One of the beneficial things about using public transport is that a pastor can interact with fellow passengers as the Holy Spirit leads. One day whilst riding the MARTA bus he sat next to a black lady who, he noticed, was reading a devotional book so he engaged her in conversation. Her name was Mary, and she asked Frank what he did. When he answered that he was a professor and minister, she replied that she could tell that he was a minister. During their conversation, when Frank indicated his desire to conduct an inner-city ministry, she pleaded with him not to forget “. . . the least of these”. She told him that she had been looking for someone to teach her the Bible, so Frank gave her his business card. After he got home he received a phone call from her and agreed to pick her up for the Bible study at the college.

The day after meeting Mary, Frank again had lunch with his deacon friend during which they continued to discuss his vision for inner city ministry. During the conversation, this man said, not knowing what Mary had said, “don’t forget the least of these”, which confirmed in Frank’s mind the fact that he was providentially being led to this kind of ministry.

After a few weeks leading Bible study at the college, however, with attendance not going well, we made arrangements to move to a room at First United Methodist Church across the street from a former hotel converted to low-income housing where Mary was living. She and one or two of her friends attended the studies faithfully and Frank was able to “compel” a number of people hanging around the street corner to come in and join us each week and we averaged about ten in attendance. A couple of months later we decided to change location and were welcomed into St. Paul’s PCA, also in downtown Atlanta. Located in a beautiful old structure, the building had, for a period of time, been used as a restaurant, and the large room in which we conducted our Bible study had been the bar!

The street corner on which we were located did not have as many people loitering or passing by as had the corner by the Methodist church, so, even though Frank roamed the neighbouring streets looking for people to invite, attendance dropped off drastically. In one case, only the two of us were there. We were beginning to wonder whether the Lord was closing the door on this ministry, which would have been fine with us, if, indeed, this was the Lord’s will.

Then one day, April 4th, 2010, Mary came and announced “I’m gonna take you to the Bluff”. We got in the car and Mary directed us over to English Avenue, the heart of which contained an area known pejoratively as “The Bluff”. We did not know what The Bluff was, but after driving past some famous landmarks including Georgia Tech, we found ourselves in an area of broken down and burned out houses and apartment buildings, and corner convenience stores which had groups of black males loitering around, eyeing us with suspicion. It quickly became clear that we were in a dangerous neighbourhood and, as Mary directed us to a particular intersection and told us to park and get out, Frank and I looked at each other with wide-eyed apprehension. However, we obeyed, and as soon as the local residents saw Mary, whom they knew well (her husband had at one time been the drug kingpin), the black faces relaxed and we saw white teeth smiling at us and found folk shaking hands with us. It was a strange experience, and as she introduced us, Mary pointed to the steps of a derelict, roofless, old church building, the interior of which was overgrown with weeds, and told everyone within earshot that we were going to have church there the following week. This intersection, we would later discover, has one of the highest crime rates in the country. So, the following Lord’s Day, April 11th, 2010, we were back with an easel and markers conducting a Bible study on the steps. We arrived early and roamed the streets handing out leaflets, introducing ourselves, and inviting people to come to the study. That evening we had nine people in attendance. 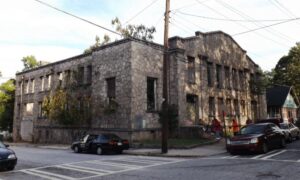 This account covers the period up to the time that I started writing articles called “Penny’s Pen” which are now archived and posted on our website.  The first one was penned in June 2010 and I know that many of our faithful prayer warriors and financial supporters have been keeping up to date with the ministry by reading these articles.

As Mary once told us, “the Devil is at that corner and he wants you to fail”.  But prayers, such as this one from John Calvin, lead us to have the faith to overcome “all the hindrances of this world”.

“Grant, Almighty God, that since Satan at this day sets against us many terrors to cast us down, and we are very weak – O grant that with our eyes lifted above we may meditate on that invincible power which thou possessest, and by which thou canst overcome all the hindrances of this world, and then, when nothing in this world but what is contemptible appears to be capable of confirming and supporting our faith, may we, nevertheless, by the eyes of faith, behold thy hidden power and never doubt that thou wilt at length perform what the world at this day thinks to be impossible, and therefore ridicules; and may we so constantly persevere in this confidence that every one of us may devote to thee his labour to the end, and never faint in the work of promoting the spiritual building, until at length we ourselves shall be assembled, and others also shall be gathered through our labours, to offer to thee not only spiritual sacrifices such as thou receivest now from us, but also to offer to thee, together with the angels, that eternal sacrifice of praise and triumphant thanksgiving on seeing perfected what at this day is only feebly begun.”

Knowing that our efforts are indeed feeble but exhorted by the Holy spirit not to despise the day of small things (Zechariah 4:10) we pray that the Lord would smile upon his servants as we attempt to claim this portion of downtown Atlanta for Christ and that He, by His grace, would grant us the stamina and resources to carry on.