April 2017―Over the last twelve months we have had to say goodbye to some old friends and hello to some new ones.  We were very sad to lose the Myers family (Chris, Misty, Trinity, Houston, Elissa and Anastasia) in May when the United States Army transferred Chris, who had been recently promoted to the rank of captain, to Fort Lee in Virginia.  The family had been an invaluable asset to the ministry for more than two years.

We then had to say goodbye to Paul Struwe, who, with a big heart for inner-city ministries, used to travel about 45 minutes from his home in Dallas, Georgia, to be of service in whatever way he could.  For many months he taught the teenage Sunday School class and was beloved of everyone in the Fellowship.  Paul moved to North Carolina to take up a new teaching position in a school in Gastonia.

Having lost these seven people in such a short space of time we felt very thin on the ground in terms of helpers, with only Pastor Frank and myself, and our three stalwart Sunday School teachers.   The Lord was most gracious, however, in bringing a new family, the McPhersons, to join us.  Frank first heard from Sean McPherson while we were on vacation in early July.  It was while we were sitting on the balcony of our hotel, looking out over the breakers of the Atlantic Ocean at Old Orchard Beach, Maine, that the surprise phone call was received.  Sean and his wife Anne were intending to move to Georgia which was very exciting news, of course, and we were thrilled to welcome them to the ministry in late July.  Starting in August, he has been teaching the adult Sunday School class, and has demonstrated not only a deep theological understanding but also a tremendous knack for patiently answering deep questions.  Anne has been serving as our regular precentor, and also is a substitute children’s Sunday School teacher.

As you already know, since June 2015 we have been worshipping in one half of a duplex, which has worked very well for us.  Our Sunday School teachers are particularly thrilled as they have their own rooms that they could decorate, and in which they can store their teaching materials.  The occupants of the other half of the duplex, however, turned out to be your friendly neighbourhood crooks!   The first of two sets of neighbours comprised a ten year old girl living there with her grandmother because her mother had passed away.  At some point a male friend of the grandmother moved in and problems started to develop.

On arriving at the building one day in the middle of a week in early April a year ago, we found a heavy-duty extension cord running from the neighbours’ side to our outside light fixture.  To begin with we tried to be gracious and allowed them to continue to use our electricity until the weekend.  After that, we threw the circuit breaker to that light whenever we left the building.  A week and a half later as we got to the church on the Lord’s Day, I noticed a number of bits of pink attic insulation on the floor in the upstairs hallway.  At first I couldn’t imagine what it was doing there, but then it dawned on me, with a shiver, that someone had entered our locked building via the attic stairs since we were there last.  It was one of our helpers who suggested that the most likely explanation was that someone from next door had cut a hole in the attic wall separating the two halves of the building and had accessed our side in order to steal electricity.  This was confirmed after the service when someone climbed up into the attic and reported that there was, indeed, a hole big enough for a man to climb through.

We said goodbye to these people when they were evicted in the middle of the year and shortly afterwards we said hello to the new family that moved in―a man and a woman and seven children.  To begin with we had a good relationship with them.  We were happy to have their children come to Sunday school and church and they were not too badly behaved.  Very quickly, however, another couple moved in with four children.  The man was quite an unpleasant character and the children were very badly behaved, which rubbed off on the first family.  Then the grandmother of the first family moved in, making five adults and eleven children living there.

The children from next door came to the Vacation Bible School which was held in June courtesy of a group of seven members of the Columbus (Indiana) RP Church (See Penny’s Pen dated June 24th, 2016), and every week a few of them came to Sunday school and/or church.  Sometimes we were overwhelmed by the sheer numbers who “invaded”, and, because they lived next door, they wandered in and out as they pleased.  Some new rules had to be written to prevent serious disruption of the worship service.

As time went by, our relationship with the adults really deteriorated.  The grounds became a real mess, with enormous amounts of trash which grew every week.  Many Sundays when we arrived Miss Amy or I would walk around picking up trash, often ending up with a bag-full.

The water bill was paid by the landlord because there was only one water meter.  We aren’t sure what the neighbours were doing with regards to water, but the landlord ended up with a $6,000 bill.  Even taking into consideration the high cost of water in the city of Atlanta, this was extraordinary.  The landlord had the water turned off for a while which really angered the men in the house.  To do that was illegal, however, so he had to turn it on again.  Eventually these families were evicted, leaving a dreadful mess behind them which was quite costly to clean up.  As a parting gesture they turned all the water taps on full as they left the house.  Thankfully the property manager came by the next day and turned them off.  When we arrived on the Sunday, however, we found that water was pouring onto the ground from beneath the kitchen and running down both driveways.  As the door was unlocked we went in and found that someone had torn out the kitchen sink leaving it in the living room, and had stolen some of the pipes leaving the main pipe gushing water without any way to turn it off or cap it.  One of our men had a tool with which to turn it off at the street.  In addition, a truck parked on the property which the owner had purchased for the property manager to use was stolen.

Not surprisingly, the owner, a church in the Los Angeles area, decided to sell the building.  So we now have a new landlord and an uncertain future.   We are hoping and praying that we will be able to stay on here, at least for the time being.  And one would think that, even though our lease calls for a monthly rent of less than the going rate for the area, the new owners would be more than happy to have us continue as tenants given the fact that we actually look after the property.

We are in the process of trying to start a building fund so that we can raise funds in earnest for a property of our own.  One challenge is that, with the increasing gentrification of our ministry area, prices have gone up rapidly.  However, as Pastor Frank has said, “Nothing that half a million dollars can’t solve!”

We celebrated two birthdays this year―the first was a celebration for Miss Rose’s birthday in January, when we surprised her with a birthday cake: 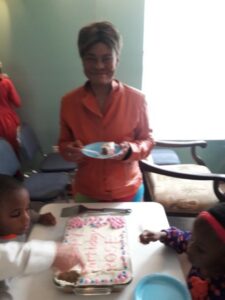 The second was in March when we welcomed the arrival of Wynter Nicole Franklin, whose mother, Tawana, is a regular attender.  Baby Wynter is pictured here with her mother during her first visit to APF, and with big brother Cornelius: 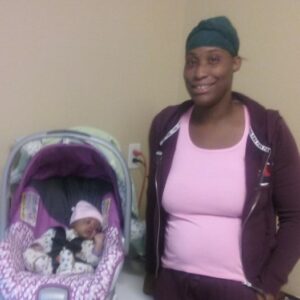 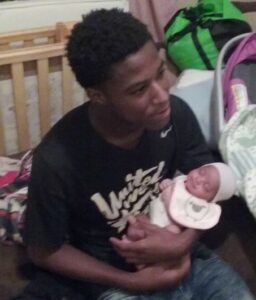 Those of you who have visited Atlanta Presbyterian Fellowship will remember Jenario and Miyani Robinson who, along with their mother, Miyoshi, have been with us since shortly after we started a Bible Study in 2010: 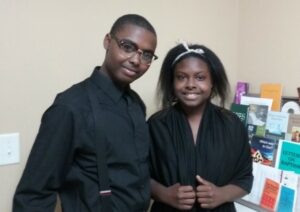 Other prayer requests include the following:

Overall, the number of people attending the service on any given Lord’s Day is down relative to last year.  But this is a community that moves around a lot so we never know for how long we will have the opportunity to minister to any given person before he or she moves on.  Even Jenario and his family have moved nine times in the six-plus years that we have known them but, thankfully, always to somewhere close enough that we have been able to pick them up and bring them to church.

Even though we are averaging fewer people in attendance we do feel as though we have a stronger core group, which gives us the time to minister to individuals more effectively.  With fewer undisciplined children attending, and with the addition of a nursery/cry room into which the service can be piped by intercom, our worship services have been quieter and more reverent, which has been much appreciated by the adults who are thereby developing a deeper knowledge of biblical doctrines and the application of them to their lives.