January 2016―”Islam is a religion of peace and it has been demonized by the likes of Donald Trump and others who play on the xenophobic paranoia of our white brothers and sisters.  We welcome the Nation of Islam into the English Avenue community. The Nation of Islam has an excellent track record for taking Black males and ministering to them and giving them a sense of hope and discipline and dignity and introducing them to God through the Muslim faith, and we applaud that.”  That is a quote from a Baptist pastor located in our ministry area.

We should note here that the Nation of Islam is an American invention, begun in 1930 and led by men such as Malcolm X and Louis Farrakhan.   It is not traditional Islam, being neither Sunni or Shiite, but is a militant, black superiority religion. 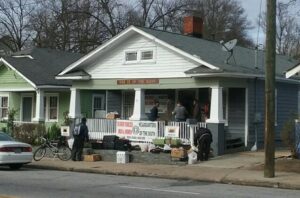 According to the report by an online news outlet, the Nation of Islam leader in Atlanta is planning to put down “an anchor,” stating that, “We are getting ready to build an army over here for real.  Ten thousand, think about that. ”  The location from which he is recruiting his “army” is only several blocks from where we meet.  In August, the Nation of Islam had a vocal presence at the anti-drug and pro-law enforcement National Night Out on a weekday evening in the English Avenue community (aka the Bluff; that being a pejorative name for our ministry area), which event was attended by representatives of the U.S. Attorney’s Office, police, and politicians.

When Pastor Frank mentioned, as an application in a recent sermon, the fact that a local Baptist preacher is supporting this attempted takeover of the neighbourhood, it was met with loud outcries of disbelief and anger by adult members of our congregation who either live now or have previously lived in the Bluff.  Frank had to calm the congregation down before being able to continue.

The sermon was an exegesis of the parable that Jesus told, in which an evil spirit leaves a man but comes back later with seven other demons worse than he is, the result being that the man is far worse off than he had been before.  The application of this in terms of the Bluff is that even if the neighbourhood is cleaned up from drugs, that would not solve the more basic problem, which is that something is needed to fill the void when the demon leaves.  And that has to be Jesus Christ.

The Nation of Islam is not the only Muslim activity in our area.  The Atlanta Muslim Center meets at 2 o’clock Sunday afternoons at a house right in the heart of the Bluff, just half a block from where we used to gather on the steps of the derelict church building.  On an adjacent empty lot, that group sponsors a community garden.  There have been free food giveaways by Muslims very close by the intersection where we used to conduct Bible studies.  And just a block away from that old church building, down another street, is a commercial building flying an American and an Islamic flag where, on the last Lord’s Day in December, a couple of Muslims were “preaching” with the use of a loudspeaker system.  That location is just two blocks from where we presently meet for worship―so close that we were able to hear the amplified voice though not able to distinguish the words.  When Pastor Frank happened to drive by, he saw the two men―with no one gathering with them or apparently listening―and was able to hear the man with the microphone complaining about how the police kill blacks. 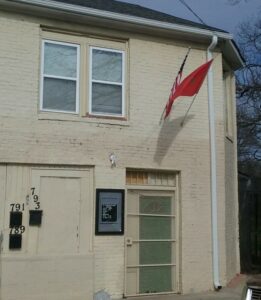 It goes without saying that we were surprised but grateful for the visceral reaction from our congregation.  The Muslim invasion, which, amazingly began only a few months ago, is rapidly expanding in range and influence.  That, and the lack of resistance to it by most of the Christian churches in the area, continued to be the main topic of conversation following the service.  We can only hope and pray that other area residents are similarly discerning.

Jesus said, “I am the Way, the Truth and the Life.  No-one comes to the Father but by me”.   Not by Allah, not by Mohammed, not by Buddha, not by the pantheon of Hindu gods, not by my own good works.  But by Christ alone.

There is a spiritual battle raging in the English Avenue district.   Please pray with us that we can proclaim the Lordship of Jesus Christ so powerfully that the demons will flee and that the message of Christ, and Christ alone, will fill the void.